Team Knuble broke the ice 1:09 into the opening frame when Tyler Kleven (Fargo, N.D./U.S. National Under-18 Team) made an outlet pass from his defensive zone that found Brett Berard (East Greenwich, Conn./U.S. National Under-18 Team) behind the Team Gomez defenders at center ice. On the breakaway, Berard beat netminder Aidan McCarthy (Novi, Mich./Dubuque Fighting Saints) with a wrist shot on the glove side.

Alex Laferriere (Chatham, N.J./Des Moines Buccaneers) evened the score for Team Gomez nearly 10 minutes later on the power play after being set up by Alex Gaffney (West Orange, N.J./Muskegon Lumberjacks) with a backhand pass from beneath the goal line that found an open Laferriere just below the left circle.

Laferriere nearly found the net for a second time just minutes later on a breakaway, but netminder Drew Commesso (Norwell, Mass./U.S. National Under-18 Team) made the initial save and another on the rebound attempt to keep the game knotted at 1-1.

Team Knuble regained its lead with 2:21 to play in the first period off a beautiful passing play. Sanderson started the rush in his defensive zone. He sent a backhand pass to Hunter Strand (Anchorage, Alaska/U.S. National Under-18 Team) as he crossed the offensive blue line before getting it right back and dishing it across the slot to Ty Smilanic (Denver, Colo./U.S. National Under-18 Team), who found the back of the net.

Less than one minute later, Kleven extended the lead to 3-1 with a one-time blast from the top of the right circle that made its way through traffic and beat the goaltender low on the blocker side.

Strand added to the Team Knuble lead just over three minutes into the final frame. Dylan Peterson (Roseville, Calif./U.S. National Under-18 Team) slid a pass to Sanderson as he skated from the right point toward the slot. Sanderson then connected with Strand, who was alone on the backdoor to extend the lead to 5-1.

Team Knuble goaltender Noah Grannan (Germantown, Wis./U.S. National Under-18 Team) led the way between the pipes with 11 saves on 11 shots, while teammate Commesso stopped 10 of 11 shots. For Team Gomez, McCarthy made 16 saves on 19 shots and Logan Stein (Suwannee, Ga./Waterloo Black Hawks) turned away 7 of the 10 shots faced. 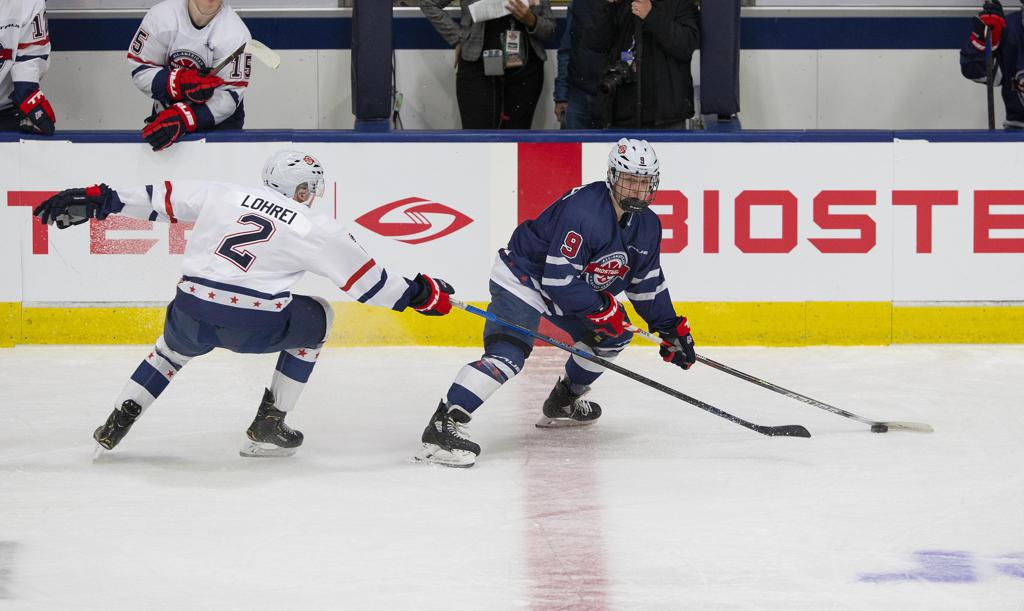