All four officials for the game took unique paths to get there, helping one other along the way.

Officiating the 2022 BioSteel All-American Game was a lifelong dream for several longtime friends.

Referees John Lindner and Rocco Stachowiak, along with linesmen Bryan Gorcoff and Matt Heinen, worked the 2022 BioSteel All-American Game, which took place on Jan. 17 at the USA Hockey Arena in Plymouth, Michigan. While the game served as an NHL Draft prospect showcase for the players, the officials had their own history; they previously worked together when they officiated the United States Hockey League’s (USHL) Clark Cup in May, 2021.

“It was a great opportunity and a really fun skate, especially being with the same crew as I had during the Clark Cup in May,” Lindner said. “I’ve known all of those guys for multiple seasons. Getting to work the final in the USHL was huge and the All-American Game was huge. It’s always great to move on, but being able to do so with your friends is probably the best part of officiating.”

All four officials are currently working their first ECHL season, and they all have experience officiating junior hockey in the North American Hockey League (NAHL) and the USHL. Lindner and Gorcoff came through the NAHL together in Texas during the 2017 season.

“John and I have been skating games for four or five years now,” Gorcoff said. “We skated three or four games a month together and spent countless miles on the road together. It was cool to have all of those guys on the game. These are some lifelong friends that I made along the way and it adds to how special this event is. Hockey is great, but it’s all about the friends and relationships you form over the years.”

Stachowiak said the group doesn’t see each other as much now that they’re working in the ECHL, so the BioSteel All-American Game was a nice reunion.

“Getting to see them again and re-live that bond we had when we worked together more consistently contributes to making this a memorable moment,” Stachowiak said. “To be able to work a game with a bunch of friends and have a good time was a blast.”

Gorcoff recalled a time when he, Lindner and Heinen worked the first game of the USHL’s Western Conference Final. Heinen was happy to not only share his junior hockey career alongside his friends, but to have another opportunity to work with them again on national television. The BioSteel All-American Game, which was broadcast live on NHL Network, featured the top American players eligible for June’s NHL Draft. 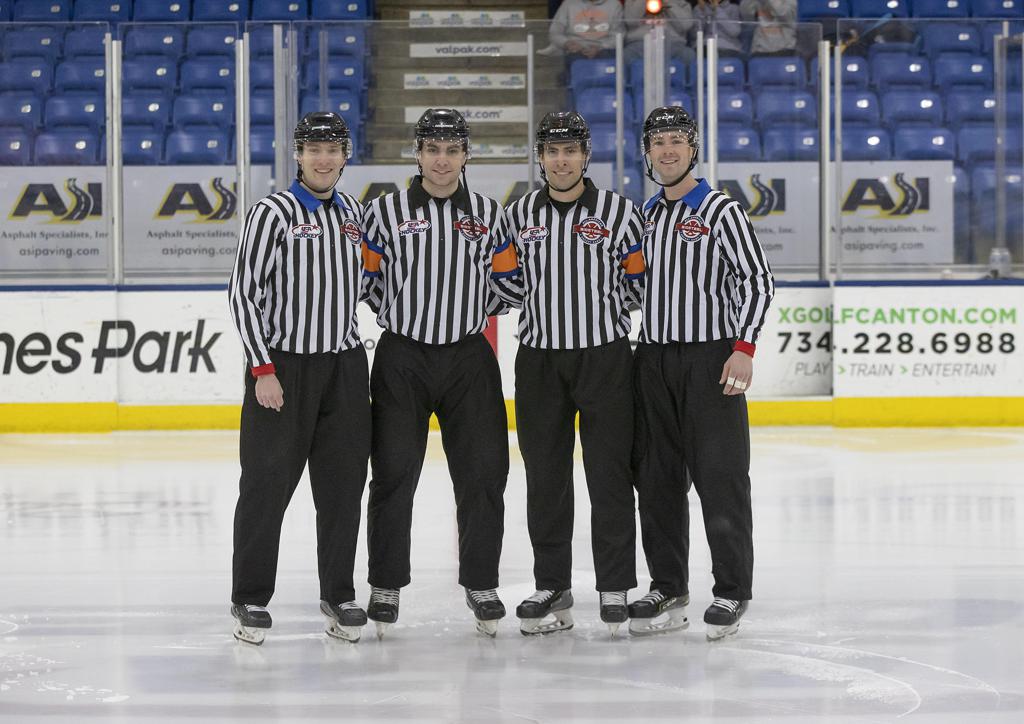 Lindner, a native of San Diego, has been an official since he was 11. In addition to the USHL Clark Cup Final, Lindner has also officiated the 2018 NAHL Top Prospects Tournament and the 2019 NAHL Robertson Cup Championship.

In officiating, Lindner initially felt he could have a job to fall back on throughout his life, but instead he decided to make it his career and life’s work.

“I’ve been very fortunate to have the ride that I’ve had to this point,” Lindner said. “The path to success isn’t linear and it’s easy to get discouraged. You just have to dig deep, believe in yourself and keep going because confidence is one of the most important traits to have. Making it to the BioSteel All-American Game was absolutely a huge milestone for me.”

Stachowiak, of Chicago, is in his ninth season with USA Hockey’s Officiating Development Program, which includes six years as a linesman. Stachowiak, in addition to officiating the 2021 Clark Cup Final, also worked the 2015 NAHL Top Prospects Tournament.

Stachowiak, who started officiating when he turned 14, initially saw it as an avenue to be around the game and gain additional ice time.

“We all have dreams to get to certain leagues, or even the NHL,” Stachowiak said. “Don’t give up on them because you never know what might happen. Even getting the BioSteel All-American Game, I would’ve never thought of it. When I got the email that I was selected, I was in shock. It’s definitely an honor and an achievement to get that game. It’s memorable and something I won’t ever forget.”

Gorcoff, who is originally from Columbus, Ohio, has been an official for 12 seasons, including the 2018 Robertson Cup Championship and 2021 Clark Cup Final.

Gorcoff said that “for whatever reason,” he had an interest in officials when he watched NHL games. Gorcoff signed up and instantly fell in love with the profession.

“I was trying to get any game that I could,” Gorcoff said. “There’s no better tool you’ll find in the world of officiating than getting out there and doing games. Getting out there as much as you can will teach you better than any instructor. And skate hard every game. I know it’s an old cliché, but you never know who’s watching or who’s in the building.”

Heinen, of Minnetonka, Minnesota, followed in his father’s footsteps and started officiating at age 11 for extra money and additional ice time. When Heinen went to school at the University of Denver, he missed the game and began considering the career aspect of becoming an official.

Heinen also worked the 2019 and 2020 NAHL Top Prospects Tournament, in addition to the 2021 Clark Cup Final.

“Listen to your mentors and supervisors,” Heinen said. “Find people you can put in your corner. If you’re giving 100% every game, somebody’s going to find you because that effort does not go unnoticed. Giving 100% even when you don’t want to is what makes the difference. There were some 7 a.m. pee wee games and junior games in the coldest rink you have ever skated in. You don’t want to move because you don’t want to get wind-chill, but you have to go out, work hard and see what happens.”

Lindner couldn’t help but think about Jamie Huntley-Park, his friend and mentor who was tragically killed this past June in an automobile accident. Huntley-Park, who was also a native of San Diego, officiated three IIHF Ice Hockey Women’s World Championships. She was assigned to officiate the 2021 Women’s World Championship in Canada and was a candidate for the upcoming 2022 Olympic Winter Games.

Lindner keeps Huntley-Park’s initials on his knee pad. After every rendition of the national anthem, Lindner taps his right knee twice and says “bam, bam,” which was Huntley-Park’s nickname, before skating to the goal line and back to center ice for the start of the game.

“It’s a way that I like to honor her,” Lindner said. “She was huge in terms of my development because in San Diego we don’t have a lot of hockey resources. The fact that I got to skate in this game was a huge honor and she’s one of the people I wished I could’ve thanked before she passed away."

All four friends enjoyed the opportunity to follow in the footsteps of mentors and reconnect on the biggest stage of their careers to this point.

“Honestly, my favorite moment was at the very end when we got our picture taken together,” Stachowiak said. “I worked this game with four friends and being able to stand there together, we just kind of took it all in that we just got finished working that game. Being able to hang out for a day-and-a-half with each other, seeing guys you don’t get to see very often and enjoying the experience together was the most important thing to me.”