Mike Garman leads Team Blue behind the bench at the 2023 BioSteel All-American Game.

PLYMOUTH, Mich. -- In reality, there’s only so much coaching that Mike Garman and Nick Oliver could do in the 2023 BioSteel All-American Game on Jan. 16 at USA Hockey Arena.

Like the players, both coaches arrived in Michigan on Sunday in advance of Monday evening’s game, which brought together 45 players from across the United States Hockey League and USA Hockey’s National Team Development Program.

With nearly 200 scouts in attendance, including those from all 32 NHL teams, the game served as a benchmark for draft-eligible prospects to compete against one another in advance of the 2023 NHL Draft in June.

“I think more than anything, I’m more of a cheerleader than a coach here,” said Garman (Vail, Colo.), who led Team Blue to a 6-3 win over Team White. He serves as head coach and general manager of the USHL’s Chicago Steel.

“These are the elite players in the game, and they are obviously here for a reason.”

Like Garman, Oliver took a hands-off approach to coaching the game as well.

“The beauty of it is you are working with the best players in our country,” said Oliver (Wannaska, Minn.), who coached Team White and is the head coach of the USHL’s Fargo Force. “You don’t have to over complicate things for these guys – they’ll be able to go out and execute and make plays. I think our responsibility as coaches is to provide a little bit of framework so they can showcase how they play with one another.”

And that’s what the BioSteel All-American Game is, a showcase for some of the top young talent in front of NHL scouts, and an honor for a pair of coaches who have their respective teams primed to compete for the Clark Cup this season.

Heading into the game, Garman had the Chicago Steel in first place in the USHL on points percentage at .679 in 28 games, while Oliver and the Fargo Force were close behind with a .654 points percentage in 26 contests.

Both coaches credited their players and their staff for being behind the benches for Monday’s showcase.

“I was very excited to get the call,” Oliver said. “It’s a tremendous honor to coach in the game … the way I look at it, this is a big credit to our players and our staff for being in the spot we are in, because that’s why I was picked.”

“I feel like I’m really representing our players and our organization, it’s a reflection of their work and their compete and what they’ve done all season,” Garman said. “Then just to our staff and how great of the people I’m fortunate to work with every day, so it’s fun for me to be here and represent the Steel.”

And both are leading their teams to success in their first seasons as the head coach. 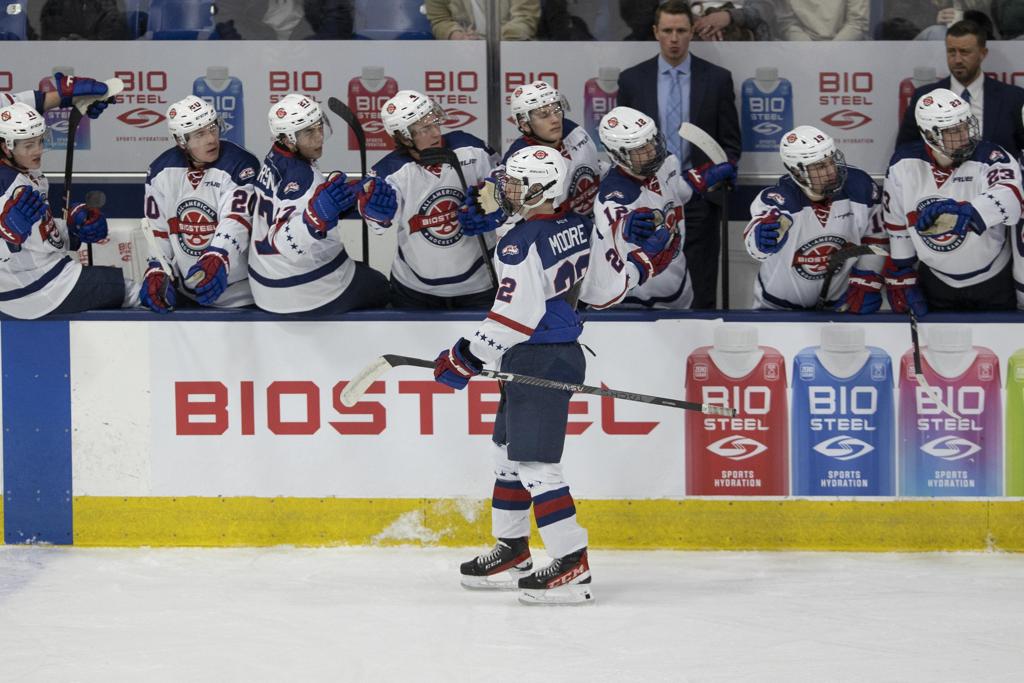 Nick Oliver leads Team White behind the bench at the 2023 BioSteel All-American Game.

Garman, 35, has been part of the Steel organization since 2017 when he joined as a goalie coach and an assistant coach. His role elevated over time, eventually leaving coaching for a season and being named general manager before the 2021-22 season.

“For whatever reason, hockey is in my blood,” Garman said. “But I didn’t know that would mean coaching. At the time, I missed being around the environment and someone called looked for a goalie coach role, and I basically took a chance to see if I liked it, and six years later, here we are. Not much of it was by design.”

Right before this season, former Steel head coach Brock Sheahan was named the new head coach for the AHL’s Chicago Wolves and Garman took over on the bench in addition to his GM role.

Oliver, 31, got into coaching directly after captaining St. Cloud State during the 2014-15 season.

“Growing up, my dad was a long-time coach of both hockey and football,” Oliver said. “I grew up right from the get-go at a hockey rink at a football field and that was my environment. I couldn’t think of a better way to grow up.”

Oliver spent time in the USHL with the Sioux Falls Stampede before joining the staff at St. Cloud State for the 2018-19 season. After four seasons at his alma mater, he was named the head coach in Fargo, a franchise he had played for after high school.

“For me, I probably wasn’t quite good enough to play at the highest level,” said Oliver, who found another track in hockey that led him to this point in his career. “But I realized that, and I started thinking about ways I could stay in this environment.”