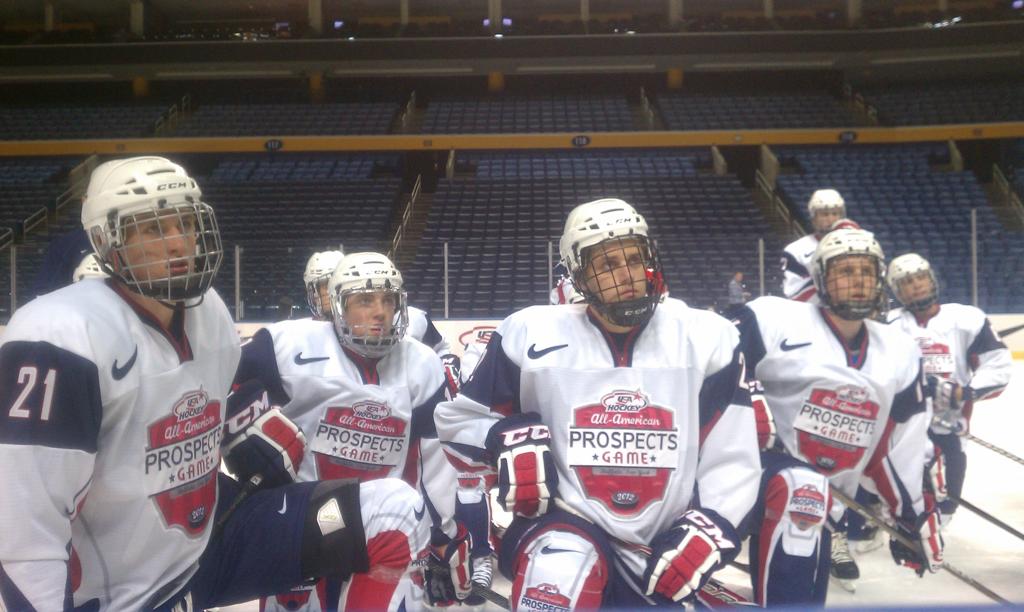 BUFFALO—With five hours remaining until the puck is dropped at the CCM/USA Hockey All-American Prospects Game the anticipation is building for players, coaches and fans.

Team Housley and Team McClanahan arrived at the First Niagara Center at 8:30 a.m. for a morning skate and locker room tours courtesy of the Buffalo Sabres.

Despite limited opportunities to play together, both teams hit the ice with speed, agility, adrenaline and anticipation. Phil Housley and Rob McClanahan led the team’s through a series of drills to help get the blood going and muscles juiced for tonight’s action.

“We just wanted to get them out there and get a feel for the rink,” Housley said. “Just mainly get a little flow out there and [keep it] short and sweet, just the way we wanted. Get them a sweat.

“Get the flight and travel out of them and get ready for tonight because they should approach this game and be very serious,” he added. “It’s not a wide open game. You’re going to be judged on a lot of things, especially positionally where you are on the ice in the defensive zone or how you play the puck.”

Waterloo Blackhawk defensemen Ian McCoshen said despite the short amount of time on the ice it was good for the teammates to feel each other out.

“It was good to just get acquainted with the guys and get a little bit of chemistry even though it was only a half hour,” he said. “There were some pretty high-end players.”

Many of the players have been playing together since they were younger and tonight they will be playing with the recognition as being some of the best American-born hockey players.

“It’s kind of scary,” McCoshen said. “You grow up playing pee-wee against them and now all of a sudden they are here. You’re saying good for them and the best of luck.”

U.S. National Under-18 team forward Tyler Kelleher said seeing his name on the back of a CCM/USA Hockey All-American Prospects Game jersey this morning was a breathtaking experience.

“It was awesome. Everyone is so talented,” Kelleher said. “We first [got] in there and the jerseys were unbelieveable. When you get out [on the ice] you just imagine seeing a sold out crowd out.”

“There are guys from all different colleges and it’s something two years ago I never would of imagined being here,” added the Longmeadow, Mass., native.

Goaltender Hunter Miska will play for Team Housley tonight and met the coach at a high school tournament two years ago.

When Miska steps between the pipes at the First Niagara Center he will be standing in the crease of one of his idols, Sabres goaltender Ryan Miller.

“It’s pretty cool and it’s an honor to be out there in his rink,” Miska said. “I look up to him. He is a pretty big inspiration to me.”

While one team was on the ice the other had an opportunity to tour the Sabres locker room facilities, which were recently renovated. Along with the Buffalo dressing room that features an illuminated Buffalo Sabre in the middle of the floor and individual cooling lockers, the players also saw the team’s dining, training, lounge and studying facilities.

“It was pretty cool. The locker room itself it really tremendous,” said Waterloo Blackhawks goaltender Cal Petersen (Waterloo, Iowa). “You get to see all the players that are playing right now and their pictures all over the wall.”

CCM, the title sponsor of the inaugural All-American Prospects Game, also provided the players an opportunity to check out the latest sticks, skates and goalie equipment during a one-hour information session.

J.T. Compher is one of 16 players from the National Team Development program suiting up tonight. The NTDP is another esteemed honor for an American skater to receive, yet Compher believes the CCM/USA Hockey All-American Prospect Game carries that same prestige for tonight’s players.

“It’s an honor for both,” said the Northbrook, Ill., native. “It’s great to be playing at the national program and playing in international countries for your country wearing that crest. And being selected here is also honor being able to play with the best players in America.

“Just the talent that is here is unbelieveable,” Compher added. “From Canadian Hockey League guys, USHL guys [and] college guys there is a ton of talent here. It’s going to be a great game tonight.”

Tonight is the beginning of something special and a celebration of hockey in the United States. Compher believes many kids across the U.S. will strive to be named to future CCM/USA Hockey All-American Prospect Games.

“This is going to be something a lot of kids will want to play in because of the scouting and how much fun it’s been so far.”