PITTSBURGH - Hours before the puck drop, Mark Johnson and Joe Mullen were still trying to put the finishing touches on their friendly wager over the outcome of tonight’s CCM/USA Hockey All-American Prospects Game.

Johnson was leaning toward some Philly cheese steaks from Mullen, an assistant coach with the Flyers, if his squad wins tonight’s game. And Mullen may want to have Johnson, the head coach at the University of Wisconsin women’s program, deliver some bratwursts.

And if food is not part of the equation, Johnson has a backup plan.

“I’m having a cheese head flown in, and he’ll have to wear it if we win.”

Coaches set their lineups on Thursday morning. Check out the line charts here

Coaches Mark Johnson and Joe Mullen put their teams through a practice to help the players acclimate before squaring off later this evening.

"I think the message to the kids was 'don't be too nervous, just play your game and have fun.' If you're having fun your legs are working, your brain is working and everything else will fall in place," Mullen said.

Land of the Giants

As an assistant coach with the Philadelphia Flyers, Joe Mullen is used to dealing with massive defensemen and towering forwards. But he never knew they got that big, that quick.

During his pregame skate with his team, Mullen, who measures in at 5-foot-10, found himself looking up at several towering 17-year-olds, including St. Louis forward Ryan MacInnis, who is 6-foot-4, and Ryan Collins, a 6-foot-5 defenseman from Bloomington, Minn. And the size doesn’t stop at the blueline. Even Ed Minney, a goalie from Wind Gap, Pa., is 6-foot-4.

“It’s incredible,” Mullen said. “I guess I see that in the pros all the time, and now I see where they’re coming from.”

Hours after his Pittsburgh Penguins beat the Detroit Red Wings, 5-1, in an exhibition game in Detroit, Dan Bylsma was back to work at the Consol Energy Center watching some the morning skates. Bylsma, who will serve as the head coach of the 2014 U.S. Olympic Team, will drop the ceremonial puck as part of the pregame festivities at the 2013 CCM/USA Hockey All-American Prospects Game.

The game is a homecoming for Kevin Reiter, the new goaltending coach for the National Team Development Program. The Pittsburgh native grew up as a Penguins fan, and was a season ticket holder when the team played in the Igloo, which now a parking lot across the street from the Consol Energy Center.

“When I saw that this was on the calendar I didn’t know that this was in Pittsburgh. Just coming back into the city and into this building is a great feeling,” said Reiter, who spent the past two seasons coaching in Sterzing, Italy as assistant and goaltending coach for the WSV Sterzing-SSI Vipiteno Broncos. “Just to be a part of this event is really a surreal feeling.”

The return to Pittsburgh was a trip down memory lane for Mullen and Johnson, who opened up about his experience during one of the Penguins Stanley Cup victories.

"I remember when my dad was coaching the Penguins in the Stanley Cup Finals and I went to the clinching game in Minnesota," Johnson said about his dad, "Badger" Bob Johnson, who coached the Penguins during the 1990-91 season. "I went down to the locker room after they won the Cup. I've seen my dad in a lot of situations, but I had never seen him with as big a smile on his face as I did that night. That was a special memory for me."

Mullen said he was honored to be asked to coach a team back in Pittsburgh where his name is listed on the locker room wall as one of the Penguin greats.

"It feels great. Every time I get back to Pittsburgh I enjoy myself," he said. "The people here always make me feel welcomed."

Goalies Ready for Anything 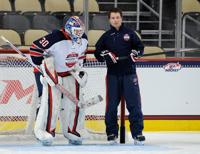 As a topflight goaltender in his own rite, Kevin Reiter has played in a number of all-star games and showcases similar to tonight's game.

“I’ve played in some all-star games and some showcase games. They’re kind of hit or miss. You don’t know how it’s going to go on or how it’s going to go. Sometimes guys try to make a high-risk, high-reward type of play to show their offensive abilities when maybe they should have done something else,” said Reiter, who grew up in Pittsburgh and played his college hockey at the University of Alaska Anchorage.

“I think the first five or seven minutes will set the tone and then everyone will get a feel for each other and how it’s going to go. I’ve been a part of games where they first and second shots you face are breakaways. Those are never fun.”

The Pittsburgh Penguins hosted a reception at the arena on Wednesday night for the players and staff. Jim Johannson, assistant executive director of hockey operations for USA Hockey, said the reception was the beginning of a full slate of events aimed in part at rewarding the top young American players for their hard work so far.

"This game is about these players and celebrating the American player, and thank you to the Penguins for allowing us to celebrate here in Pittsburgh," he said.

It's not every day that you get to tour an NHL locker room facilities with the team's president as your guide. But the 40 players and coaching staff were given a behind the scenes look at the Pittsburgh Penguins facilities at the Console Energy Center thanks to David Morehouse. Players posed for pictures in front of Sidney Crosby's locker, toured Suite 66, named after team owner Mario Lemieux and shot pucks at the Penguins shooting facility.