PHILADELPHIA — As Cayden Primeau took the ice Thursday night, he couldn’t help but think how different this moment was.

“Ha, it was definitely a little different,” Primeau said with a laugh as he thought back to the first time he skated competitively at the Wells Fargo Center.

It was intermission of a Flyers game nearly a decade ago and he was one of the “Mites on Ice.” This time, Primeau, now 17, was between the pipes in the CCM/USA Hockey All-American Prospects Game.

Thursday’s fifth annual contest featured 42 American-born high school seniors (and a few college freshmen), many of whom will one day skate at the Wells Fargo Center as NHL players. If they do, they’ll follow in the footsteps of Cayden’s dad, Keith Primeau, a former NHL All-Star who played with four teams, including the Philadelphia Flyers. 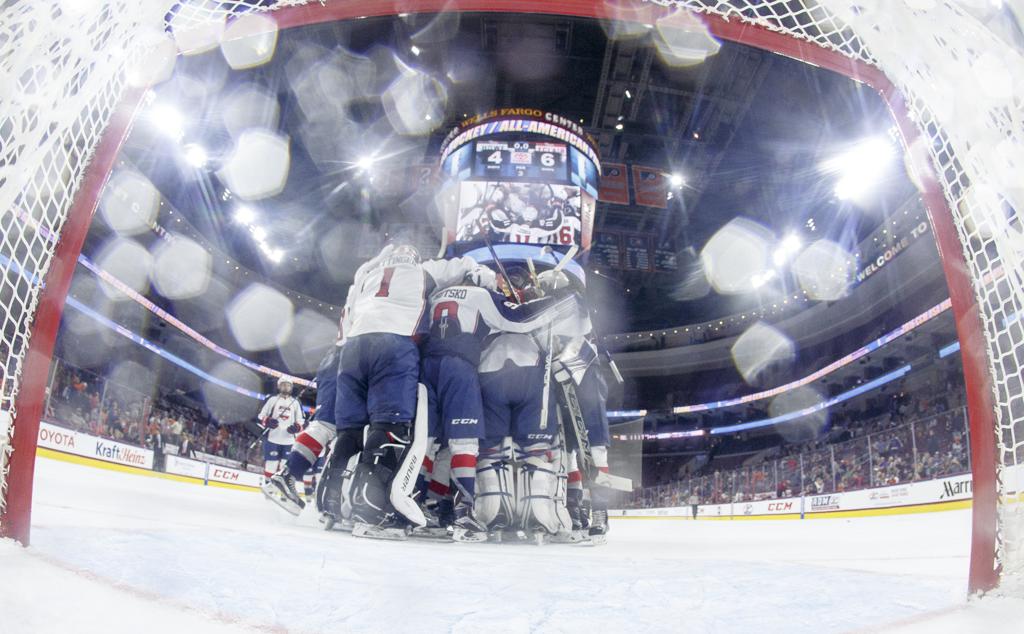 Keith Primeau was in attendance Thursday along with many of Cayden’s family and friends — “too many to count,” according to the New Jersey native. “My parents went phone call crazy. But it was great to have that kind of support.”

And there was plenty of cheering from that section of the crowd, as Primeau stopped 17 of 19 shots in his team’s 6-4 victory.

“I was happy with how I played,” said the 6-foot-3, 180-pound Northeastern University commit. “I feel like the last two months, I’ve really progressed. I try to progress with every week, every day, every period, every shot … But yeah, this is home for me. I used to come here to watch my dad and all of my role models, so playing in this game was quite an experience.”

Part of the special experience for Primeau was playing for coach John LeClair, a former standout on Team USA and a member of the U.S. Hockey Hall of Fame.

“He did well,” said LeClair, who has known Primeau virtually his entire life. “I’ve had a chance to see him play quite a bit. But yeah, he held his own. I wasn’t surprised at all that he had a strong second half.”

Primeau was hardly the only elite talent out there, as the ice was littered with players who are heading to (or already are playing for) some of the nation’s elite college programs, including the University of Michigan, the University of Minnesota, Boston College and Boston University.

“With all the high talent in this game, it was really neat,” Primeau said, while LeClair added that “the skill level was high. They’re talented kids.”

And that talent comes from all across the country. For instance, Michael Pastujov, a University of Michigan commit, became the first player from the Tampa, Florida area to get drafted when the New York Islanders chose him in the seventh round earlier this summer.

“There’s a lot of talent out there,” Pastujov said. “Everybody’s skilled. Everybody’s good.”

“It’s always great, it’s definitely fun playing against the other best guys,” said Casey Mittelstadt, who was named the player of the game after scoring two goals for coach Mark Howe’s team. The Eden Prairie, Minnesota native will be heading to the University of Minnesota, along with five other players who participated in Thursday’s all-star game. “There’s definitely a little bit of bragging rights out there.”

One of the four players from this contest who already is in college is another Minnesota native, Jake Oettinger, a current freshman at Boston University. Oettinger split time with Primeau in between the pipes for Team LeClair and finished with 12 saves on 14 shots against a lineup loaded with talent.

“It showed how deep U.S. talent is,” Oettinger said. “It showed how many good players there are. There’s a lot of high end skill and it showed tonight.”

As for Team USA, generally speaking?

As USA Hockey celebrates its 80th anniversary, some exciting times may lie just ahead.

“Obviously everyone out there was talented,” Primeau said. “We are going in the right direction. This gives you a feel for the future — games like this — but we all showed what we can do.”

LeClair, who recalled winning the 1996 World Cup with Team USA as “one of the highlights of my career,” concurred with his goaltenders that the future looks bright.

“The U.S. skill level is promising,” said LeClair, who scored 406 career NHL goals, ninth-most all-time among U.S.-born players. “You don’t have to be 6 feet or 200 pounds. It’s all skill and speed. If you can play, you can play. You see the U.S. talent that is coming through the ranks — and hopefully there is a lot more behind it.”