The sixth annual CCM/USA Hockey All-American Prospects Game takes place tonight with a 7 p.m. ET face-off at KeyBank Center, home of the NHL's Buffalo Sabres. Tickets for the game are $10 general admission and still available here or at the KeyBank Center Box Office.

The game features 42 of the best U.S.-born players eligible for the 2018 NHL Draft, of which 39 appear on the 2017-18 NHL Central Scouting Pre-Season Futures List that designates players with potential to be selected in the first three rounds of the draft.

The 2017 AAPG will be streamed live, free-for-view, on HockeyTV and AllAmericanProspectsGame.com. NHL Network's Paul Severino and EJ Hradek will provide play-by-play commentary while Brian Duff, the Buffalo Sabres rinkside reporter, will also be on hand. 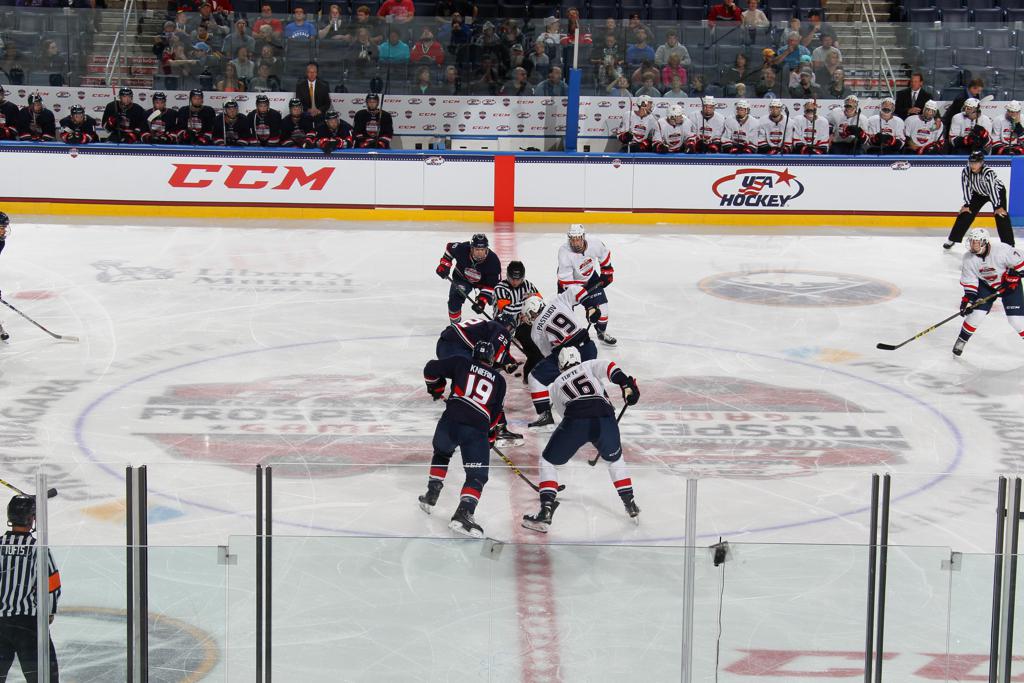 Brian Leetch, whose 18-year NHL career resulted into being inducted into both the U.S. Hockey Hall of Fame (2008) and Hockey Hall of Fame (2009), will serve as a head coach for the CCM/USA Hockey All-American Prospects Game for the rst time.
One of only seven blueliners to accumulate more than 1,000 points in his career (247-781--1028), Leetch skated for three teams over his NHL career, including the New York Rangers (1988-2004), Toronto Maple Leafs (2004) and Boston Bruins (2005-06). On Sept. 5, the New York Rangers named Leetch a hockey operations advisor, where he will assist the Rangers in both hockey-related decisions along with o -ice player and prospect development.

Behind The Scenes: Game Day Practices

Thirty-seven players are verbally committed to NCAA programs. Additionally, defenseman Quinn Hughes is a freshman at the University of Michigan (Big Ten) while forward Brady Tkachuk is entering his rst season at Boston University (Hockey East).

A total of 34 players have developmental roots in the USHL. As the top junior league in the United States, the USHL prepares players for NCAA Division I hockey as well as careers in the NHL. Last year, 38 Americans with ties to the USHL were selected in the 2017 NHL Draft, including 24 players who skated in the USHL during 2016-17.

If there is one word to describe what the CCM/USA Hockey All-American Prospects Game has become over the years, it's “showcase.”

As American hockey players continue to expand their influence in the NHL and internationally, USA Hockey sought a new way to attract and grow hockey players. With volunteers, organizations and leagues across the country continuing to develop high-quality player, the idea of a game to showcase the future of American hockey came to fruition. For more, click here.

The 2018 International Ice Hockey Federation World Junior Championship will take place Dec. 26, 2017 – Jan. 5, 2018, in Buffalo, New York. This is only the fifth World Junior Championship to be played in the United States and the second time it has been played in Bu alo (2011). At the 2011 event, Russia won gold, Canada earned silver and the U.S. claimed the bronze medal.

Individual tickets to the outdoor game will go on sale to the general public on Monday, Sept. 25 at 10 a.m. and will start between $45 and $110. A special presale opportunity for USA Hockey members, Buffalo Bills season ticket members, Buffalo Sabres season ticket holders, and My One Buffalo members will take place on Sept. 21 and Sept. 22.